Scoring the Canadian premiere of Robert L. Freedman & Steven Lutvak’s Tony Award-winning “A Gentleman’s Guide To Love & Murder”,  Stage West Calgary left nothing to chance. A top-shelf cast, a keenly sharp house band, and a returning solid gold director at the helm make this one of the best bets that you’ll leave at the end with a broad smile on your face.

Of course, the writing helps immensely, as the story and songs allow each actor to propel both the story-line and the assorted characters along to an ending with a hilarious twist. The entire production is truly tongue-in-cheek but in a way that allows the audience in on the jokes, and possibly even rooting for a happy ending for a goodnatured murderer. I guess all those TV anti-hero hits over the past decade or so have leavened our senses, or the humour is just that strong.

As is the case with this blog review, I’ll be leaving much out to have appear in my official Calgary Herald review, which should come out over the next week. That said, I can give you some highlights and high points.

In the case of this production, we are forewarned at the start by a chorus of mourners to leave while we still can, given the gory proceedings about to be shared. well, as gory as a comedy will afford, and none actually seen on stage…

In a nutshell, which is kind-of what the retro footlights onstage look like, our “hero” is Montague “Monty” Navarro (Sayer Roberts), who discovers that he comes from a far more prominent bloodline than the one has been forced to live out his entire young life. His mother was a D’Ysquith before she was cast out for marrying beneath her own rank, so in a dizzying round of information from Miss Shingle (Elizabeth Stepkowski-Tarhan) Monty must wrap around the news that he is in line to become an earl, should the multitude of other D’Ysquiths depart this mortal coil ahead of him. 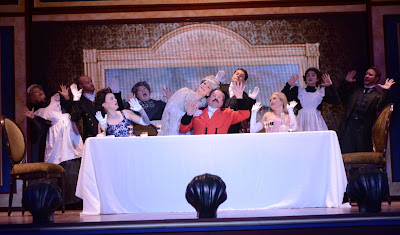 As you may imagine, the temptation to escalate that opportunity offsets the ethical merits of enabling those demises, and Monty begins to eliminate his relatives in a series of seemingly accidental deaths.

Man, it’s hard to hold back given how good all this is, so maybe I had better utilize point form to hit on a few highlights before I wrap this up:

* Roberts is a talent, with his ability to convey the transformation from the innocent youth into the scheming murderer. Great vocalist as well.
* Elizabeth Stepkowski-Tarhan always delivers, and in this case she plays a somewhat minor role that may or may not be so minor.
* Kate Blackburn is Sibella Hallward, a schemer in her own right that loves Monty but won’t marry a poverty-stricken sort. What a stellar voice - perfectly suited for this genre of musical theatre.
* Ellen Denny plays Phoebe D’Ysquith, Monty’s betrothed once he moves upward towards his place in the D’Ysquith standings. Another astounding singer.
* Tyler Murree plays most members of the D’Ysquith family, and I can’t say that restricts him to male roles. Absolutely a standout on every level here.
* Mark Bellamy & Konrad Pluta as director and musical director respectively - each one producing exceptional results.

This may be the longest short review I’ve ever given - all I can say is that the Calgary Herald review is longer, and more informative. I’ll add a link once that is live online to share. 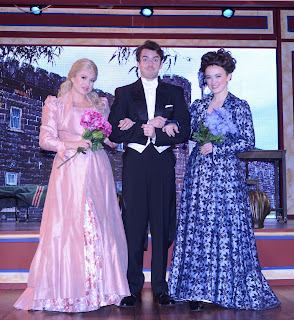 Posted by ThatDanGuy at 11:40 AM No comments: