The World Goes 'Round, now at Stage West Calgary

The World Goes ‘Round

The Songs Of Kander & Ebb

There is plenty to like about Stage West Calgary’s The World Goes 'Round, their latest foray into a musical overview of Broadway and Hollywood hits, but as things ultimately wrap up, there’s also something hard to pinpoint with respect to the overall enjoyment of the show.

I’ll be a bit more general here as I have a full review to prepare for The Calgary Herald, but there’s as much good as there is lacking in this tribute to the composing team of Kander & Ebb, the duo that gave us enduring musical theatre hits like Zorba, Chicago, Kiss Of The Spider Woman and Cabaret.

Strong actors, soaring vocals, and a house band reinforced with horns and an upright bass just don’t seem enough to overcome whatever it is that’s missing in the end.

It could be the addition of many songs and plays that are lesser known, or it could be the isolation of iconic performances that are stubbornly familiar from the original productions. Somehow it comes across in The World Goes ‘Round as a version of the songs for sure, but often not nearly as captivating. 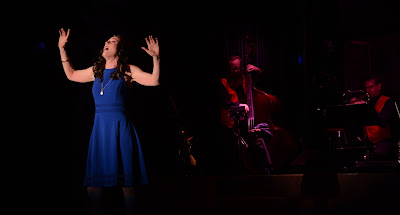 You sure can’t fault the cast. Director and choreographer Tim French assembles his usual collective of talented performers, and things really do get off to a rousing start by Sarah Horsman with her powerful rendition of the title song. Each and every actor has showcase moments along the way. And each proves amply able to reach the rafters vocally when they are tasked to do so.

Not enough humour? Odd arrangements that include a barbershop quintet/Manhattan Transfer version of Cabaret? I’m hard-pressed to pinpoint any single aspect that leaves you wanting more, given the catalogue of hits that John Kander & Fred Ebb composed for Broadway and Hollywood productions.

In some regards, the context of the storyline perhaps escalates the meanings of the songs as the original play unfolds, so maybe plucking them out of that environment dilutes the proceedings? Perhaps it’s just me?

At any rate, there is no faulting some strong performances. Troy Goldthorp shines in selections from Woman Of The Year, Chicago, and even a lengthy dance routine later in the show. Sarah Higgins is just as strong with songs from Funny Lady, Flora The Red Menace, and The Rink.

Tyler McKinnon stands tall figuratively and literally performing I Don’t Remember You from The Happy Time, and Kiss Of The Spider Woman. Sash Striga gets the closest to the familiar staging on All That Jazz from Chicago, and is part of that aforementioned dance sequence with Goldthorp. 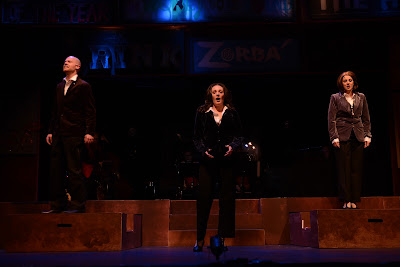 Along the way, there’s rollerskating, a ukulele segment, and some neat staging with footlights at one point. Marquees frequently illuminate to give viewers a clue to the lesser-known musicals. On the surface, all would seem like another musical revue hit, but whatever it is that is missing, takes just enough wind out of the sails to not quite make it to that intended destination.

More to follow in my upcoming Calgary Herald review, I’ll link here once that is live!

Posted by ThatDanGuy at 12:15 PM No comments: