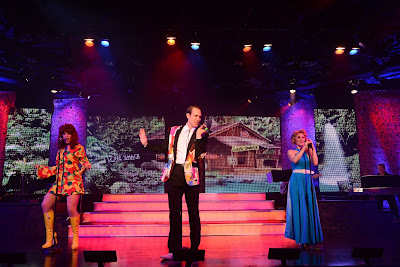 Who says sequel's are bound to disappoint?

Filled with razor-sharp humour, and sight gags that even take a bit of time to manifest before you crack up at their ingenuity, "80's Solid Gold 2" at Stage West Calgary is set to become another favourite for the run it will enjoy now and on into the new year.

Man, casting makes these shows tick, and in the case of the sequel that includes a broad selection of musical tracks from the era, there are so many that are sure to find a wide enough array of styles to appeal broadly to most audiences, and then some.

Well, and the actual cast too - many returning after absences, some lingering almost long enough at Stage West that they are just about needing to update their driver's licence information, and some new faces.

All in all, they get to represent most of the successful and significant songs of the decade that offered possibly the most diverse and innovative sounds in musical history. 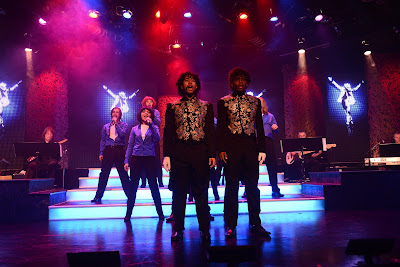 As usual, I have to hold back much of my commentary for the official Calgary Herald review I'll be putting together as soon as I post this one (link as soon as that is live to share!).

However, I can tease you with just a few of the names that get showcased in fine form here:

Don Henley, Bryan Adams, The B-52's, Michael Jackson, Janet Jackson, rockers AC/DC, Van Halen, and Bon Jovi...the list is extensive, and there is little to disappoint with how their songs are re-imagined, or respectfully recreated over the two acts.

Effective use of stage-length video screens (this was the era of MTV and Much Music after all), some of the best costumes for a revue, and bang-on choreography had tables around me entirely caught up in the experience for the media night presentation. 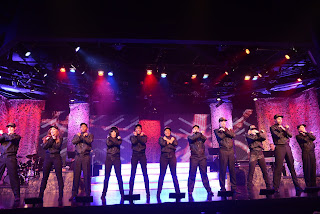 Again, as soon as that official Calgary Herald review goes live, I'll post a new link to direct you there.

In the meantime, enjoy a sumptuous holiday dinner along with this upbeat, terribly fun sequel to 80's Solid Gold.

Posted by ThatDanGuy at 9:24 AM No comments:

In my latest REM column, I wonder how those often husky-looking snowmen might try losing a few pounds.

Read all about that here!

Later!
Posted by ThatDanGuy at 10:47 AM No comments:

Funny how life is.

After spending years writing with a scattergun approach,  across a wide variety of spectrums and publications, my determination back in May to focus on blues, folk and roots music has taken me right back home, literally with respect to the Canadian market, and figuratively. My first professional writing credit was for the music business back in Winnipeg in 19xxxxxxxxxxx.......mumble mumble...

Today I'm getting re-tweeted and Facebooked all across the country thanks to a good decision, and good people that continue to support me.

Check out today's online feature, and thanks everyone for helping me find my way, despite my own best efforts to remain lost in the crowd.


Posted by ThatDanGuy at 9:54 AM No comments: