When it comes to adapting Broadway musicals, Stage West often meets or exceeds expectations. Given the intimacy of their stage, that’s not always easy to imagine.

With Legally Blonde The Musical, the dinner theatre adds another winner to their smash hit repertoire, along with the likes of The Producers, Young Frankenstein, and Spamalot.

Given the confines of a stage intended more for traditional 2-4 person romantic comedy fare or character dramas, it takes the perfect combination of set design, tight choreography, and a talented cast, all of which is featured prominently in this production. Familiar faces to Stage West both on the stage and off help ensure that all those facets blend seamlessly to make this show both barrels of fun, and entirely entertaining. 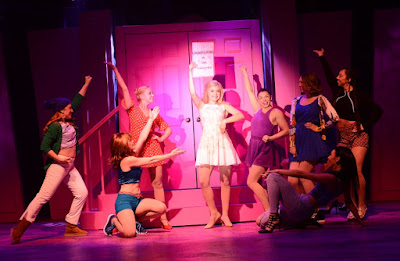 All that said, I must hold back something here for the sake of my upcoming (official) Calgary Herald review. So let’s touch on highlights to whet your ticket-buying appetite:

-The play is based on the hit film starring Reese Witherspoon as  Elle Woods, a student that gets a curve ball at the exact moment she is expecting a marriage proposal. That sets off the “fish out of water” storyline as she loses her man, endeavours to win him back by getting accepted into Harvard Law School, and along the way discovers she’s not as cardboard a character as she has been written. Elle even finds her real true love along the way. It’s all predictable, but the characters and songs poke great fun at the conceptions (and/or) misconceptions of the privileged class, elevating all well over any shortcomings.

-Returning director Liz Gilroy and choreographer Phil Nero hit the jackpot with a cast that can light up a stage with some demanding song and dance routines - even rigorously skipping rope and not missing a note (hello Britney Spears???). Once again, the cast play way above their weight class with respect to a storyline visible start to finish right from the first scene.

-Musical director Konrad Pluta and his crack band are back ensconced away in the music room adjacent to the stage after a bit of time off for the recent non-musical, and a few productions where they shared the space with the performers. Repeatedly, a highlight of any evening in this space.

-Bracken Burns as Elle Woods. Simply stated, that says it all. Burns embodies the character and lifts the lines beyond the obvious. By the end of the first act, she packs more punch than Mike Tyson at the start of his unbeaten streak in the boxing ring.

-Daniel Greenburg plays Emmett Forrest, an associate at Harvard and the friendly face that ultimately ends up even friendlier for Elle. Show after show at Stage West, you’d be hard-pressed to find a more reliable actor, and here he finds no exception to that run of successes.

-Every cast member brings their A-game to the table for this outing, but a couple in particular stand out. Patrick R. Brown transitioned directly from his role as Dr Watson in the show that just ended a run here, and he commands every inch of the stage as the inevitable villain in these proceedings. Daphne Moens literally steals the show with her powerhouse performances as Paulette, the salon owner hard done by circumstances  - until her “delivery man” comes along.

Tons of laughs, outstanding musical numbers, and a cast that you’ll root for right to the very end - Legally Blonde The Musical showcases creative talents doing what they all do best…

I'll link to my Calgary Herald review when that goes live....

Posted by ThatDanGuy at 11:07 AM No comments: